Calabria, is a region in southern Italy, forming the “toe” of the Italian Peninsula. The capital city  is Catanzaro. Other major cities are Cosenza, Crotone, Reggio Calabria, Vibo Valentia

The region is a long and narrow peninsula. It is surrounded by the 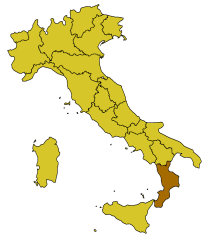 The main attractions are the coastline and the mountains. Calabria is a fascinating fusion of hundreds of miles of wonderful coastline with mountainous hinterland, as the imposing Pollino chain in the North, the Sila forested plateau in the center and the Serre and Aspromonte chains in the South.

Being the mountains so near to the sea, the rivers are all very short: called “fiumare”, they stay dry for long part of the year.

The warm climate, the beautiful colors of the sea, rocky coasts that alternate with sandy beaches, a nature that is wild and mysterious, the strong and genuine flavors of local food and the vestiges of its ancient origins make Calabria a unique place that you can enjoy all year round.  If you are a nature lover Calabria is the place for you!

The cuisine is a typical southern Italian Mediterranean cuisine with a balance between meat-based dishes, vegetables, and fish.

The region is served by three heavily used roads: two national highways along the coasts (SS1 Napoli–Reggioand SS106 Reggio–Taranto) and the A3 motorway, which links Naples and Reggio.

In Calabria there are three main airports:

The main Calabrian ports are in