The Abruzzo beaches cover 129 km of long sandy coastline, 22 of which have been awarded Blue Flag Status in Teramo and Chieti provinces (interrupted in places by pebble beaches) is home to many popular beach resorts.

Beaches worth visiting on the southern coast Francavilla al Mare, Ortona, Ripari di Giobbe, Fossacesia, San Vito Chietino and Vasto Marina; on the northern coast Silvi Marina, Torre di Cerrano and Pineto, which has a pinegrove on the seafront, followed by Roseto, Giulianova and Tortoreto. Shortly before Le Marche, Alba Adriatica, Villa Rosa and Martinsicuro close the list of seaside resorts which are considered among the best in Italy.

The Abruzzo beaches are pristine and the waters of the Adriatic are warm. 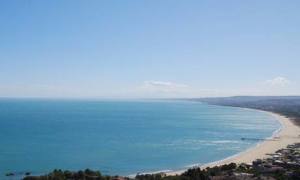 Lifeguards are operative full-time on most Italian beaches during the summer season. It is best to follow posted warning signs and status flags describing the sea’s condition on the day you decide to take a swim.

Most beaches have corded off bathing areas – pass these at your own risk, as the waters deepen significantly very quickly.

Abruzzo’s coastal resorts are worth exploring in springtime; they are less crowded and the weather is perfect for walking. 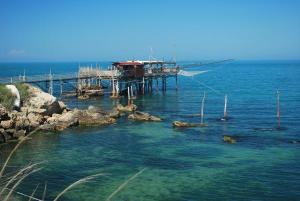 Along the south coast, strange wooden frames like small piers can be seen. These strange looking outcrops are known as Trabocchi, which are sustainable fishing machines that resemble giant beached prawns sitting on the rocks with giant tendrils casting wide nets deep out via the shoreline.

As fish is a major part of the region’s diet, these contraptions can still be seen operated to this day, catching the many great fish living in the Adriatic. Many restaurants in the region specialise in Fish Cuisine and we highly recommend a visit to one of the many great restaurants around.