Italian transport is fairly good in Abruzzo, with many new roads being built, buses that are fairly frequent and usually on time, an International airport in Pescara and a train line that can take you all over the country.

Abruzzo International Airport is the only international airport in the region and is a favourite of Budget airline Ryanair. Open to civilian traffic since 1996, it has seen a steady and gradual increase in the number of transit passengers thanks to the airlines and low-cost flights.

Today, the airport has a catchment area of over 500,000 passengers annually and connects the city of Pescara and the entire region with many Italian and European destinations. The airport is convenient to the central region, close to Pescara town and is a quieter airport making arrivals and departures a pleasant experience, without the hoardes of people often found in International airports of greater dimensions. Parking is available and is relatively cheap. 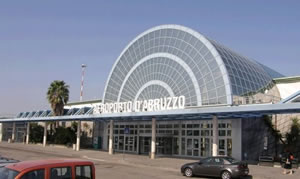 There are four main ports in Abruzzo: Pescara, Ortona, Vasto and Giulianova.

Regarding the Italian transport railway system, for some routes it has reached the situation where road transport is much faster than rail and that often leads people to use the comfortable, wifi enabled and sometimes coffee serving buses, instead of the trains. Train Rome – Sulmona – Pescara.  Pescara–Rome railway line is along the railway line Bologna–Bari on the Adriatic sea other line is important because through the Tyrrhenian coast, passing through the provinces of Pescara, Chieti and L’Aquila and ends the path to Roma Tiburtina railway station.

Road and motorway networks in the Abruzzo region are relatively well developed. There are three main highways that serve the region, all of which are well maintained, but may charge a toll for their use. This is not usually too expensive: